From the moment in October 2010 when I was told I had prostate cancer it commanded all my attention. There was no time to waste on other matters that suddenly seemed trivial by comparison, which included just about everything. My life had dramatically shifted gears, and I swept nearly everything else off the table and out of the way.

My mind was fully occupied with three things: cancer, cancer, and cancer.

I had proton therapy for my prostate cancer in early 2011, and for about a year I remained totally focused on monitoring the progress of my recovery. But that changed in 2012 when I suddenly found myself in another huge club-nobody-wants-to-join, with a member roster including William Shatner, David Letterman, Pete Townshend , Tony Randall, Jerry Stiller, and many others.

What club is that? The persistent-ringing-in-the-ear club, or tinnitus. In 2012 I was suddenly and unexpectedly granted membership. In my case it was the left ear, and the sound was (and is) more of a hiss than a whistle. My tinnitus is certainly annoying but thankfully not severe, and I’ve learned to live with a 24/7 hiss in my head. 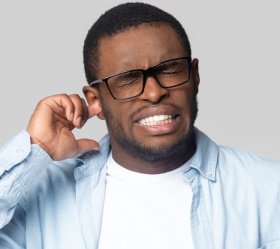 At first, my perpetually noisy universe dominated my brain. I went to bed each night and awoke each morning to the never-ending sound of air being let out of a tire. I needed all my energy to ignore it, and there was none left for what suddenly seemed trivial by comparison, which included just about everything.

Wait … trivial by comparison? I already said that.

A fly in the ointment

One afternoon as my wife Lucy and I were sitting in my car in the garage, ready to head to lunch. Oddly, there were gnats inside the car. I started swatting and swiping them away, but without success. There were several in front of me just off to the left, and my increasingly frantic hand-waving was of no consequence.

I quickly came to realize that the gnats were not real, but rather a trick of my left eye. I automatically assumed there was something in my eye, but I could not manage to clear it. The gnats accompanied us to lunch, took their seat at our table, came with us for the return ride home, and lingered for the rest of the day. I figured eye drops and a good night’s sleep would be the remedy, but alas, the next morning they were right where I left them. 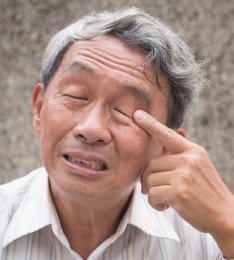 So it was off to my eye doctor, who explained the phenomenon of floaters: old-age debris floating around in my eye vitreous, forever casting shadows on my retina. Nearly everyone eventually encounters this, he explained, but this joyful factoid did not improve my displeasure with the notion of a fly-filled future.

However, there was one good thing about the floater affair. It helped me stop thinking about the hiss in my ear. My focus shifted entirely to the flies in my face, leaving no energy for tinnitus. In comparison to the ever-present floaters, everything else seemed trivial by comparison.

A breath of fresh air

While researching a risky cutting-edge laser therapy that might rid me of my floaters, I realized my right nostril was not doing its part to help me breathe. In fact, for quite some time its performance had been sub-standard, but now it was totally blocked and I began wondering what would happen if the left one shut down, too. I’ve heard you can fly a twin-engine plane with one engine down, but it’s very bad news if the other one also quits.

In a pinch I could breathe through my mouth, but somehow it’s never as satisfying. So I went back to my E.N.T, this time for the “N’ rather the “E.” He happily offered to completely rebuild my nasal innards via a surgery called rhinoplasty, which conjured images I was loathe to consider. Thankfully, he also offered a less radical out-patient procedure to shrink my turbinates. I picked that option. If you’re really interested, Google it.

While recovering from turbinate reduction, which helped only a little, I was constantly aware of the effort I needed merely to breathe. I discovered that breathing is pretty darn important to me, and my awareness and monitoring of how it was going made everything else seem trivial by comparison.

Yikes. Can four things be trivial by comparison?

So let’s see now … prostate cancer was front and center until tinnitus screeched onto the scene and banished it to the back burner. Then in turn, tinnitus was banished by a floater invasion, which was soon supplanted by an urgent need to breathe. One by one, each took center stage. And one by one, each got the hook.

Guess what happened next.

My PSA suddenly almost doubled, and in a flash, the hissing, gnats, and nostril excavation projects were swept out of my awareness. Prostate Cancer was back on the front burner. Thankfully, it was not a recurrence. A round of antibiotics knocked it down to even lower levels than in my first seven years post-proton.

Nevertheless, since then I’ve been watching my PSA like a hawk. I’m happy to report that it’s been steady, so all is well. I was even starting to enjoy my new low PSA nadir when just last month something new banished prostate cancer again to the proverbial back burner.

The sequence of events

In March of 2020 you may recall the global arrival of the infamous Coronavirus, or Covid-19. Suddenly not only my front burner, but that of the entire world, had room for little more than the virus and its many related consequences: health, the economy, jobs, schools, toilet paper, face masks, social distancing, isolation, etc. All attention was on Covid-19.

The back burner principle  … depends entirely on each individual’s timing and sequence of events.

Actually, that’s not entirely true. There are many exceptions. The back burner principle I’ve illustrated anecdotally from my life depends entirely on each individual’s timing and sequence of events. For example, had I been diagnosed with prostate cancer in March 2020, even the Coronavirus pandemic would not have been able to commandeer my front burner. My main concern would have been whether the new-normal rules of life would in any way hinder my ability to address my prostate cancer. Not vice versa.

Winning the coveted spot on the front burner is a completely subjective contest.

Regardless of what may be commanding your attention right now, all of this begs the question: Is the front burner of our brain really so small that it cannot accommodate multiple concerns simultaneously? Why can’t I be equally focused on my eyes, ears, nose, and prostate at the same time? 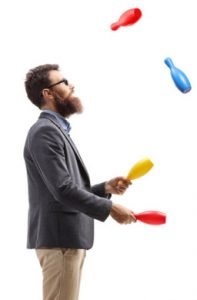 Many of us claim to be good at multi-tasking, but research says otherwise. What we may think is multi-tasking is really just quick-switching between two or more tasks. Such flip-flopping is difficult to continue for any extended time period. Furthermore, it’s less efficient than genuinely giving full attention to a single task for as long as it takes. The switching itself steals limited mental resources from the other tasks at hand.

Continuous task-switching can be both exhausting and ineffective, so when important matters are before us—especially health-related ones—we naturally tend to focus, pushing lesser concerns aside. The most recent, urgent, risky, scary, pressing proposition is the one that banishes all others to the back burner.

Instead of playing whack-a-mole with the many legitimate worries on my list, I have begun to learn how to allow the positive parts of life to occupy center stage. I’m currently working on several projects and learning to give each my full attention during the process. While doing so, all my other concerns vanish to the back burner.

I can’t control which or how many calamities will try to occupy my life’s front burner, and there’s no point trying. The trick is to find and focus on a positive replacement, sufficiently powerful to force the rest to the back burner. Family, friends, creative endeavors, fun games, engaging hobbies, public service, entrepreneurial enterprises, home projects, or merely walking the dog around the block … all good examples you may already have at hand.

Just remember that while you’re walking your dog, pay 100% attention to the dog. He won’t be distracted by the hiss in your head, and he can bring you enough love and joy to make everything else seem trivial by comparison.

So, what’s on your front burner? Email me!

Proton and Prostate
Predictions for 2017